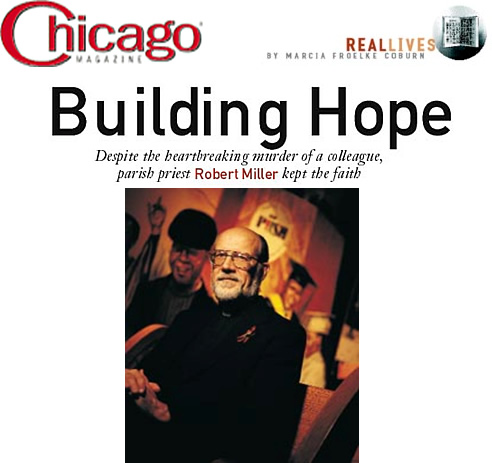 “Every priest needs to sit on the other side of the pulpit for a while,” Miller says. “Otherwise you’re just pontificating without knowing what you’re talking about.”

Ten years ago, when Father Robert Miller first moved to Chicago’s South Side, he drove around and got acquainted with the neighborhoods. “Riding through Bronzeville, I saw lots of abandoned buildings and thought, What a pit,” Miller recalls. “Then, lo and behold, five years later I wind up here. That should teach me: Never mess with God.”

Those who know the 50-year-old parish priest might also say, Don’t mess with Father Miller, for he is a man with a mission. A co-pastor of Holy Angels Catholic Church since 1995, Miller has a passion for serving his community in an active, hands-on way. To that end, in 1996 he created the Genesis Housing Development Corporation, a faith-based organization dedicated to building new single-family homes in Bronzeville and educating homeowners. After four years of strategizing, a Genesis model home, at 916 E. 40th St., is now open for viewing most Saturday afternoons. In November, the first Genesis family was scheduled to move into its new home: a two-story, three-bedroom house with a finished basement. Price tag: $180,000 (after subsidy). The Genesis development, with 26 buildings, is the neighborhood’s first in decades.

“You have no idea what it is like to see this finally happen,” says Miller. Yet he admits that the celebration is bittersweet. The dream of rebuilding a strong Bronzeville community started with Father Paul Smith, the charismatic principal of Holy Angels grade school for 24 years. A 1994 car accident left Smith partially paralyzed, and in 1996 he died from suffocation in his condo after robbers covered his eyes, nose, and mouth with tape. One of the men charged with Smith’s murder was Burrell Geralds, who was hired to be Smith’s overnight caretaker despite convictions for drug dealing and theft.

Also charged were twin brothers Fred and Freeman Carter, who, police say, joined with Geralds in a “narcotics smoking frenzy” before robbing Smith and leaving him to die. Geralds was scheduled to go on trial on November 27th, and according to defense attorney Mark Kadish, the director of pro bono work at Mayer, Brown & Platt, he will enter a plea of not guilty. “We feel it is the state’s obligation to prove its case,” says Kadish. Sources say the state’s attorney’s office is confident enough in its case to ask for the death penalty. (Freeman Carter pleaded guilty to residential burglary and possession of a stolen vehicle and was sentenced to ten years in prison. Fred Carter pleaded not guilty to murder and was awaiting trial.)

“I saw Father Smith that Friday,” says Miller. “In fact, Geralds let me into the condo on South Dorchester. Father Smith was just a marvelous man. I visited him every week, and that day he had just gotten a computer. We were working out different things he wanted to learn to do.”

The death penalty presents certain obvious ethical problems for a Catholic priest, which Miller acknowledges. “In many ways, I could understand people who support the death penalty, the idea of taking a life for a life,” he says. “And there are conflicting forces in me about this. But, in the end, I’m a Christian. I try to think what Jesus would do, and I have a hard time believing that Jesus would say take a life for a life. That doesn’t mean that, in some ways, my emotions don’t run the other way. But I would have a hard time supporting that spiritually.”

Over the years, Holy Angels Church has had more than its share of problems. Fifty years ago, the Roman Catholic parish became one of the first in the city to be open to African Americans. Because of that, the grade school was transformed, one order of nuns left, and the Franciscans arrived. In 1986, the church burned down. In 1995, the pastor, Father John Calicott, was accused of sexual abuse and temporarily removed. (The charges later were proved to be false, and today Calicott is a co-pastor with Miller.) Then, in 1996, Smith was killed. Yet Holy Angels school, with an enrollment of 1,200 children, is the largest African American Catholic grade school in the United States, and the church remains an anchor in the community.

“We’re the first ones to come in and the last to leave,” says Miller. “In a neighborhood like this, where at least 40 percent of the people live in some kind of public housing, we are the center of activism, education, and hope for people.”

“When [Genesis] first came to me, I told them that they had to take their future in their own hands,” says Toni Preckwinkle, the alderman for the 4th Ward. “It was a challenge to them.”

Admittedly, Miller took a long and winding road to this challenge on Chicago’s South Side. He grew up in Grand Rapids, Michigan, where his father was a business machine repairman and his mother was a legal secretary who once worked for Gerald Ford. Miller calls himself “one of the last of the old breed,” meaning he entered the Redemptorist seminary at the age of 14, completing high school, college, and graduate school in the order. “I don’t know if I’d recommend that for anyone else,” he says. “But it somehow worked for me.”

He was ordained in 1976 and settled into his first parish, in Iowa, the next year. His specialty was preaching five-day missions in different parishes throughout the Midwest. “I got a lot of mileage out of my mouth,” he says with a laugh.

In 1981, he was assigned to a parish in Chicago’s Lake View community, and although things were good there, he came to feel somewhat at loose ends. “I realized I needed a break. I had been in the seminary and priesthood all my life and I had some midlife issues I was wrestling with: I wasn’t sure I wanted to stay a priest; I wasn’t sure what I wanted to do or where I wanted to be.” He took a leave of absence from the priesthood in 1988, moved to Oak Park, and worked in a bookstore. For the first time in his life, he had his own apartment and his own checking account. “It was very difficult in some ways,” he says, “yet it was good for me to wrestle with those life problems. I’m now a big believer that every priest needs to sit on the other side of the pulpit for a while. Otherwise, you’re just pontificating without really knowing what you’re talking about.”

A year and a half later, Miller decided he wanted to remain a priest. “I wanted to come back and work where Jesus would work, which didn’t mean Barrington or Kenilworth,” he recalls. “It meant the inner city.” On returning, his first parish was St. Joachim on 91st Street. “Not the inner city at all, but a middle class and upper middle class African American parish,” he says. “For me, it was a good introduction out of my all-white world.” Five years later, he moved to Holy Angels.

Now he was in the inner city. There were gunshots every other day. A woman who was volunteering at the church was stabbed right outside the rectory. Miller helped organize a neighborhood group called ACTS Core Team, which established a parent patrol for the school. It also orchestrated a campaign to vote the area dry, resulting in the closing of a number of marginal liquor stores.

Then Miller and ACTS Core Team started thinking about affordable housing. “We had a meeting with Alderman Preckwinkle and I asked her, ‘What are the plans for this area? What does the city envision?’ And she said, ‘There are no plans.’ That scared me because then anyone could come in and grab up chunks of property.” Under Miller’s direction, part of Core Team spun off and joined with two other neighborhood churches—St. Elizabeth’s Catholic Church and Blackwell Memorial A.M.E. Zion—to form Genesis. (Several months ago, St. James United Methodist also joined the organization.) Genesis then bought property from the city for a dollar per lot through the revitalization program New Homes for Chicago. That savings allows Genesis to sell the new brick homes it builds for below-market prices to families under certain income caps.

“I wanted to stay in the area because my children attend Holy Angels and because it is close to my job,” says LaTanya Berry, whose family was to be one of the first to move into a new Genesis home late this fall. For Berry, a preschool teacher and single mother, the move will be the culmination of a great deal of planning and sacrifice; even her children—ages 10, 13, and 15—got involved. “They wanted to be a viable part of this plan, so they each contributed $25 from their savings.”

Although Miller is happy, he is far from satisfied. “You can’t just put up houses and expect a neighborhood to change,” he says. “That’s the problem with developers. They don’t live here; they build a house and they’re gone. But a faith-based group is there, in the neighborhood. We can help deal with the remaining issues, such as what happens to the gangs on the corner? What happens to the owners who come in but don’t have the education or experience to take care of a home? That certainly applies to a majority of people in this neighborhood, because they have never owned a house before.”

To that end, Genesis has been running homeownership seminars and credit counseling. By January, they hope to fund a full-time housing counselor and to start a homeowners’ association.

“I don’t know if I’m making any difference,” says Miller, “but I’m going to stay faithful. And I’m going to stay here. You know that Mother Teresa quote, ‘God didn’t call me to be effective; He called me to be faithful.’ That’s how I see my ministry here.”